My diary that I may update from time to time with my current thoughts or experiences.

I’m just going to be honest. Like, this is only part of the problem, and it sounds really stupid, but a lot of this (the way I have been acting) has just been because having really talented friends is really stressful. I realize that sounds awful on my part, but it's because it's really hard to keep up with them and make sure I'm worth keeping around, and I really struggle to feel proud of my work when I’m constantly overshadowed by them. Genuinely, the only thing I care about is making the people I love most proud of me and it feels out of reach. I think other people can see it too and knowing that you're the least special, talented, or popular among a group of people in a pretty big community is really hard. It’s done a number on my mental health over time. I think the last couple months have just been a breaking point for me because I don’t know how to cope with this feeling anymore.

I know how it sounds, but I haven't been able to shake the feeling that I should just give up on a project I’ve spent a really long time on, even though some people really like it. I like it too, but it makes me really sad whenever I’m reminded that my hardest work just doesn't measure up to even a fraction of their brilliance. I have sort of brought up the possibility that I’m throwing in the towel on my game. I don’t think anyone really gets it, though. They say I should just go ahead and give up if it will make me happier but I know it won’t. It’s not that I want to give up but I want it to be better than this, beyond my capabilities. Like I said, I know some other people are fans of my work. I appreciate it more than I can say, but I know I can't ever be satisfied if I can’t find a way to truly impress the people I look up to most. Otherwise I will never feel like I belong.

There is one thing that really contributed to these feelings that I can’t really disclose publicly, but I want to believe I’ve gotten my point across? Whatever. I’m just at a loss here, sorry.

My Kawaii Box for November came in the mail a little bit late but that's okay. It's adorable as always and I'm going to share what was in it this time. I've been waiting for the box to come in since I had the idea of writing about it here.

The biggest item in the box this month is the "Cinamoroll Emo Kyun Cushion". I really love getting plushies in the mail the most and this one is super cute. He's soft and his face reminds me of the pleading emoji and I think that's funny. He looked really silly when I first took him out of the box and he was vacumm-sealed. 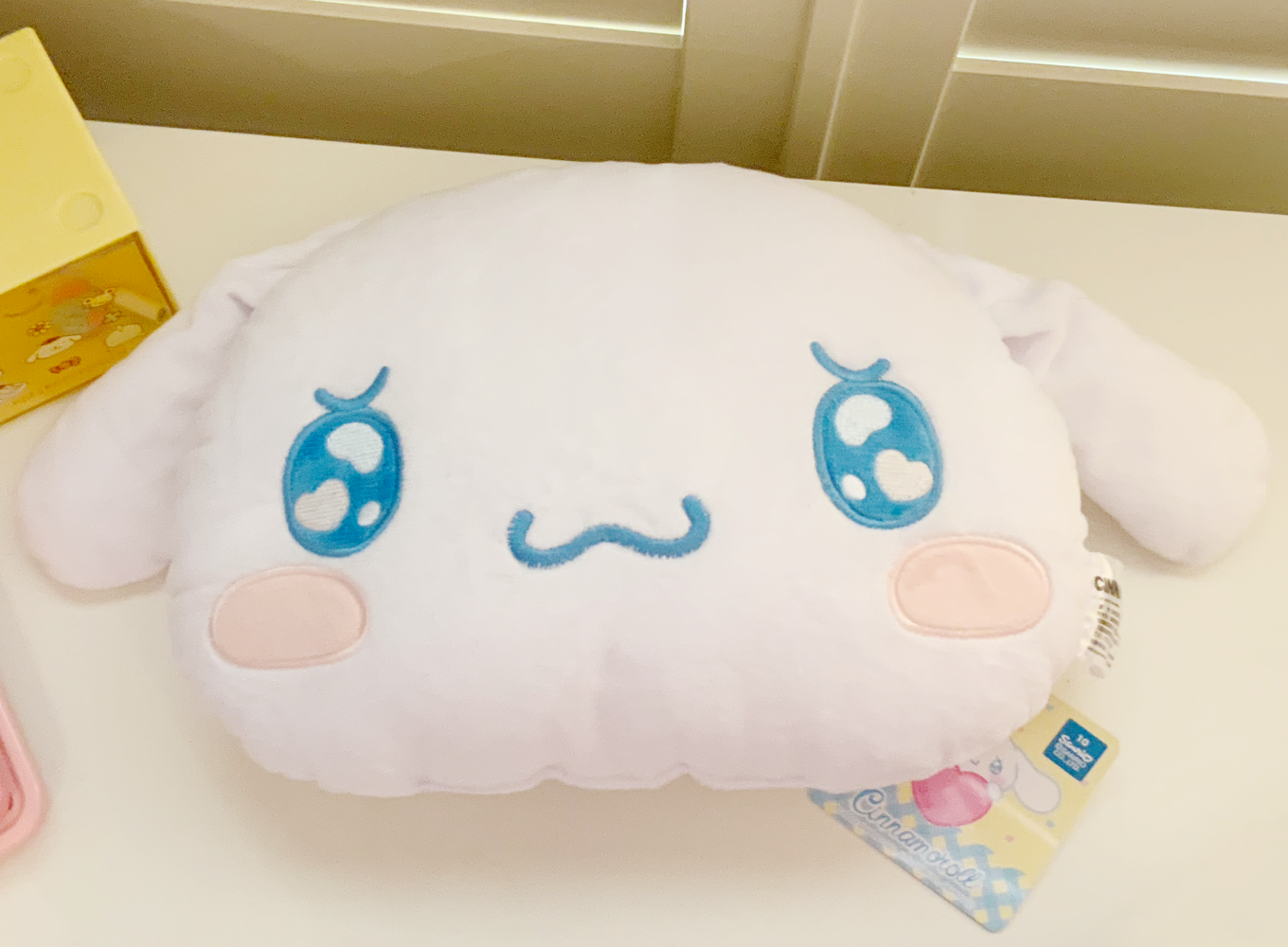 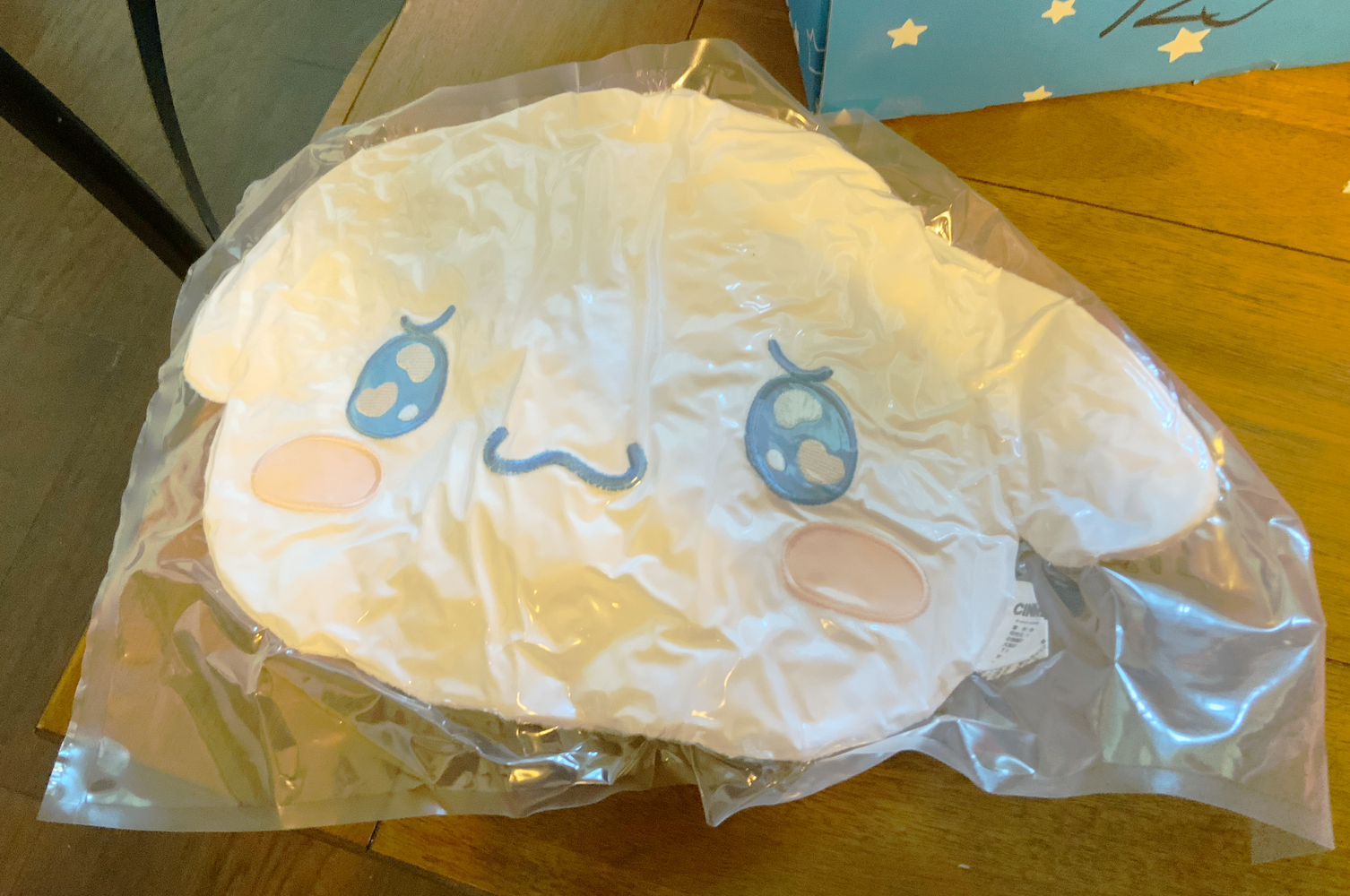 The second item in the box was one I was really excited for, it's the "Sanrio Mascot Swaying Tumbler." It's a tiny glass with the face of a Sanrio character on it. I'm really happy that I got Pompompurin because he was the one I wanted most. The thing that makes these kinds of glasses really cute is when you put a drink the same color as the character in them. It might be fun to put banana milk in this cup because it's yellow like Purin. 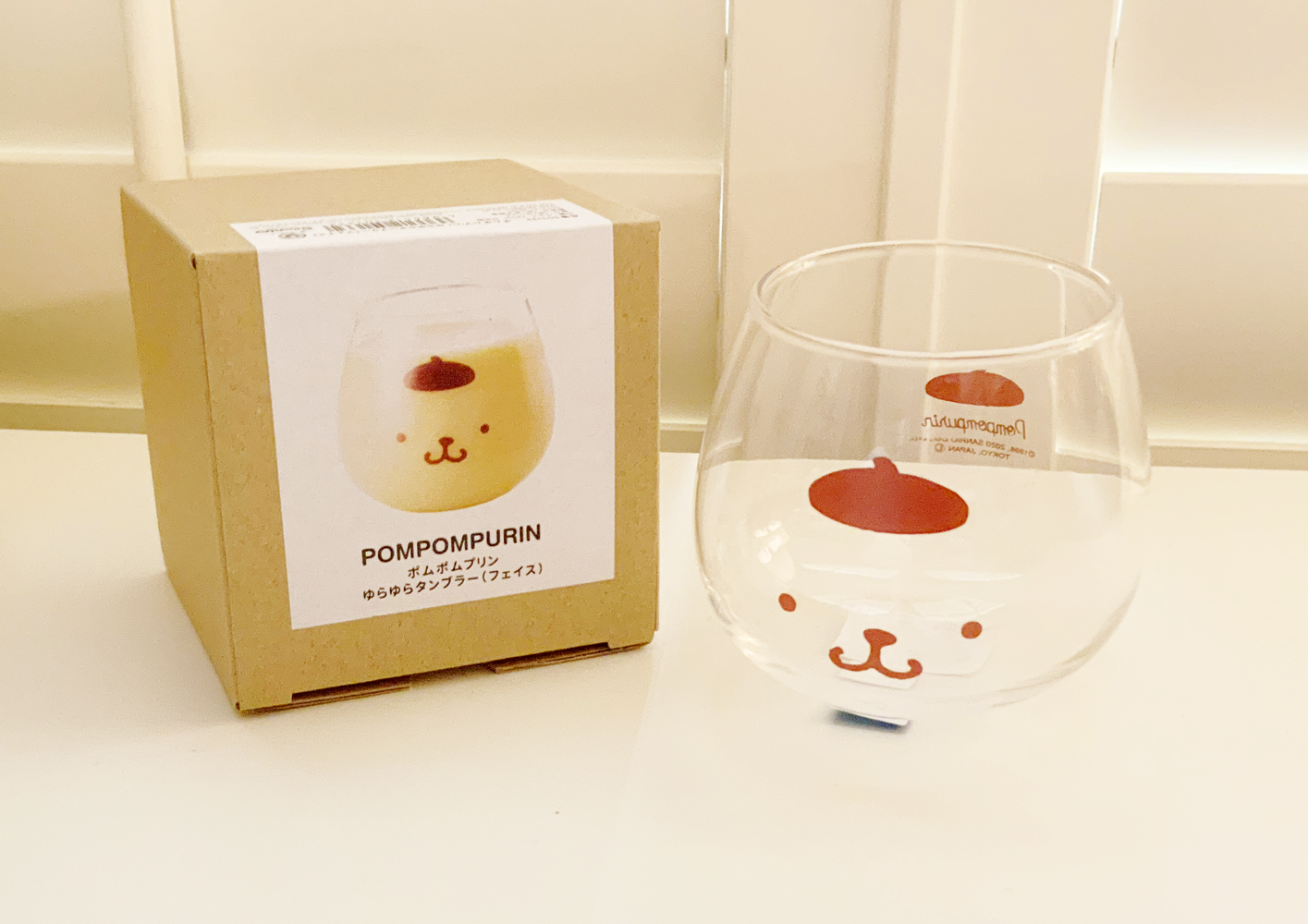 I think that the third item is really useful, it's a luggage tag with Hello Kitty and a unicorn on it. I actually needed one of these because my old suitcase tag broke. 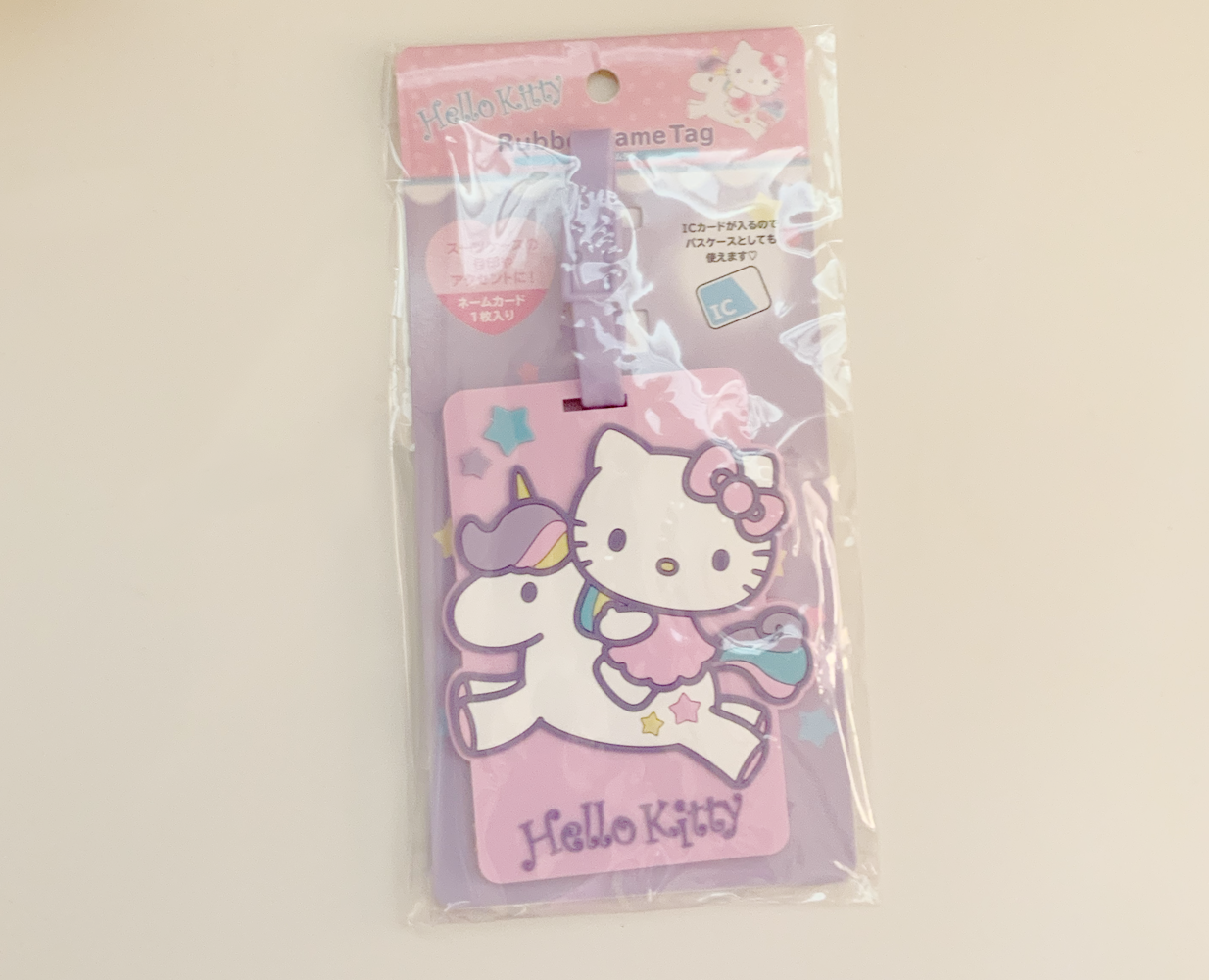 The fourth item is this really cute "Mameshiba x Sanrio Keychain." The note card that came with the box said there were seven avaiable characters and I received Kuromi. 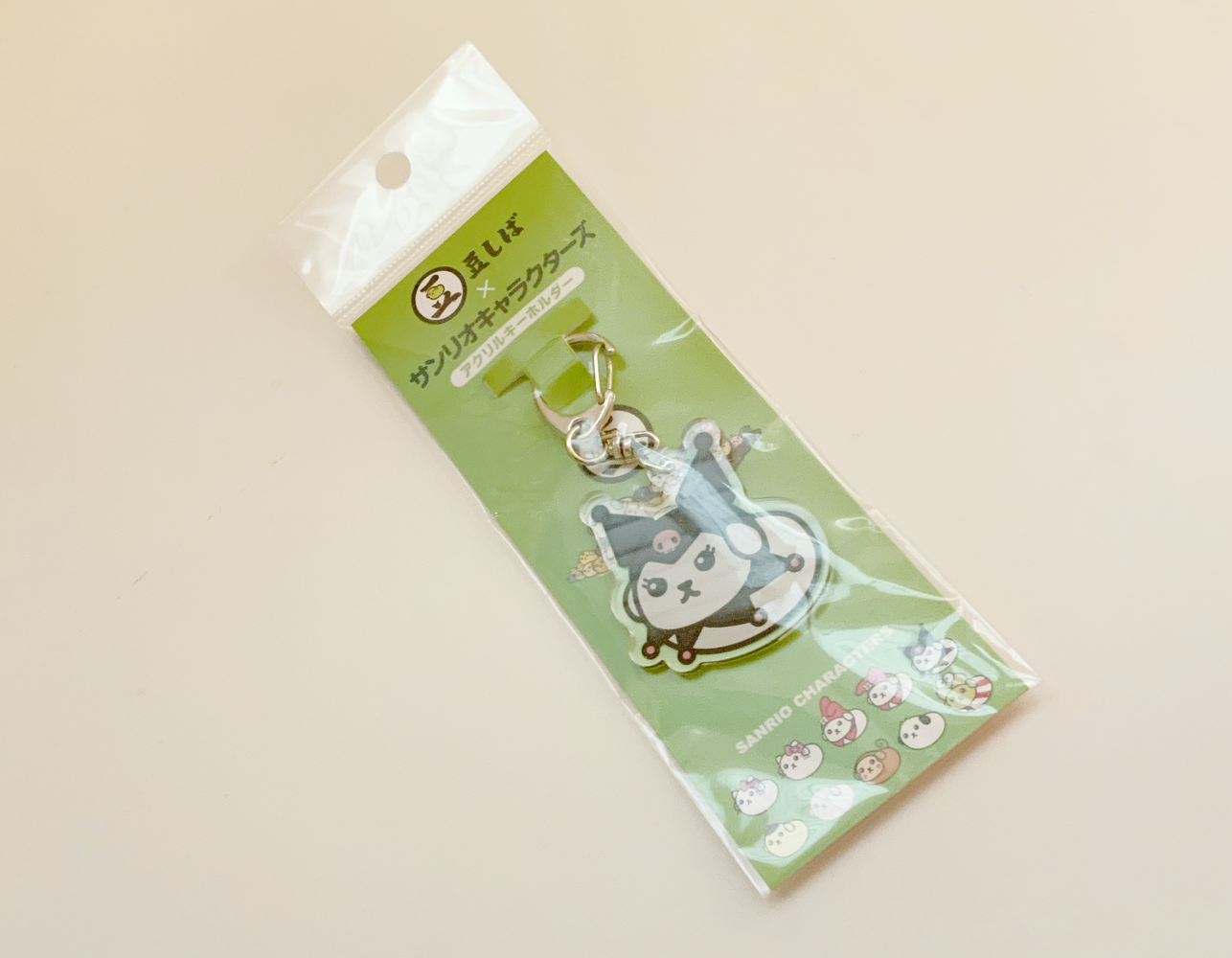 Item number five is a "Sumikkogurashi Blind Box Figure" featuring the characters in school uniforms. The one I recieved was Tonkatsu in a suit jacket and cute little bowtie. Cute, right? There was also a piece of candy in the box. 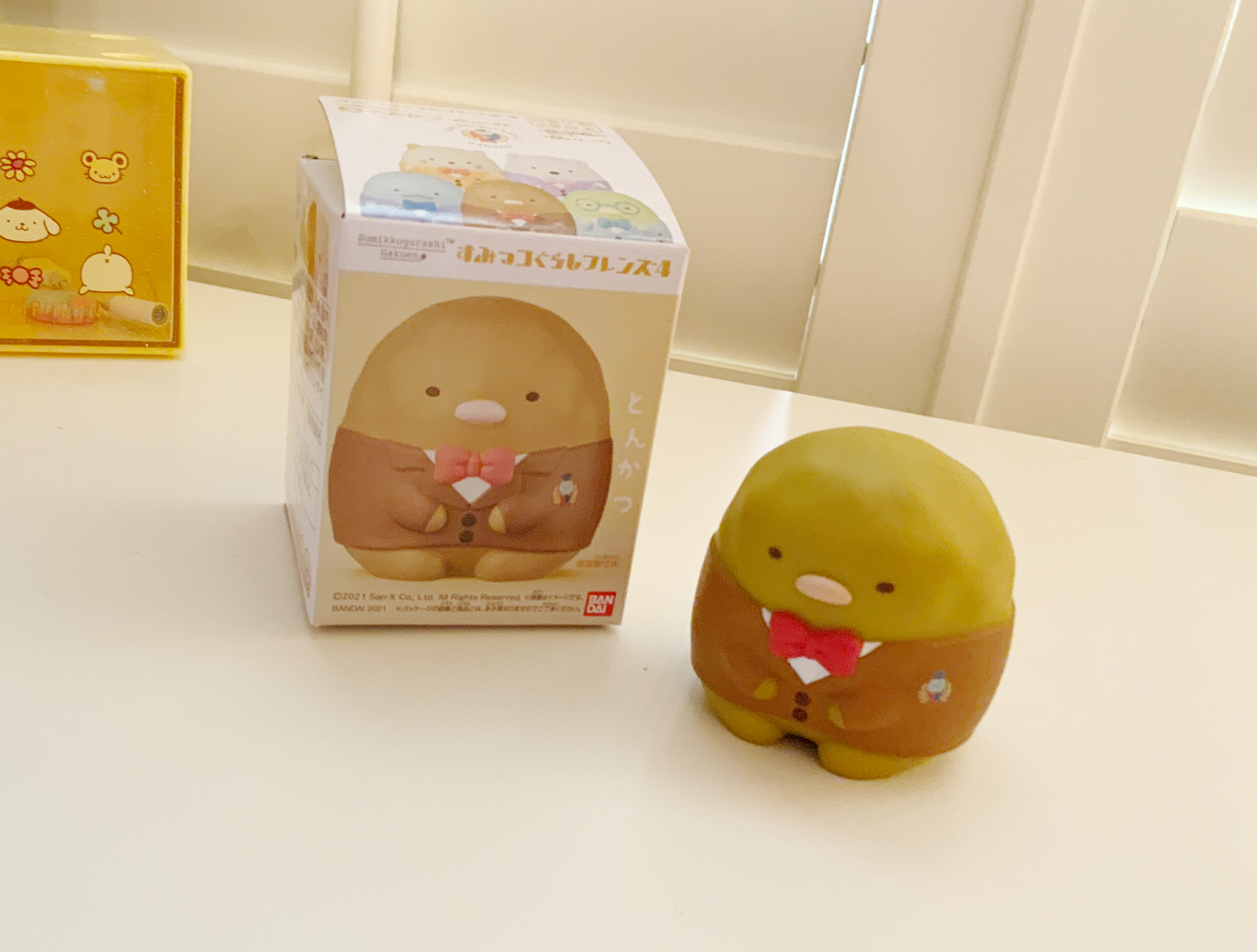 The last item for November was also Sumikkogurashi themed, it's hand and nail cream. I haven't tried it out yet because I have an already opened nail cream I should use first, but what I like about this one is that when you're finished with it, you can make a cute acrylic stand with the container and lid so that you don't have to throw out the cute design. Funnily enough, I ended up recieving the Tonkatsu design for this one as well. 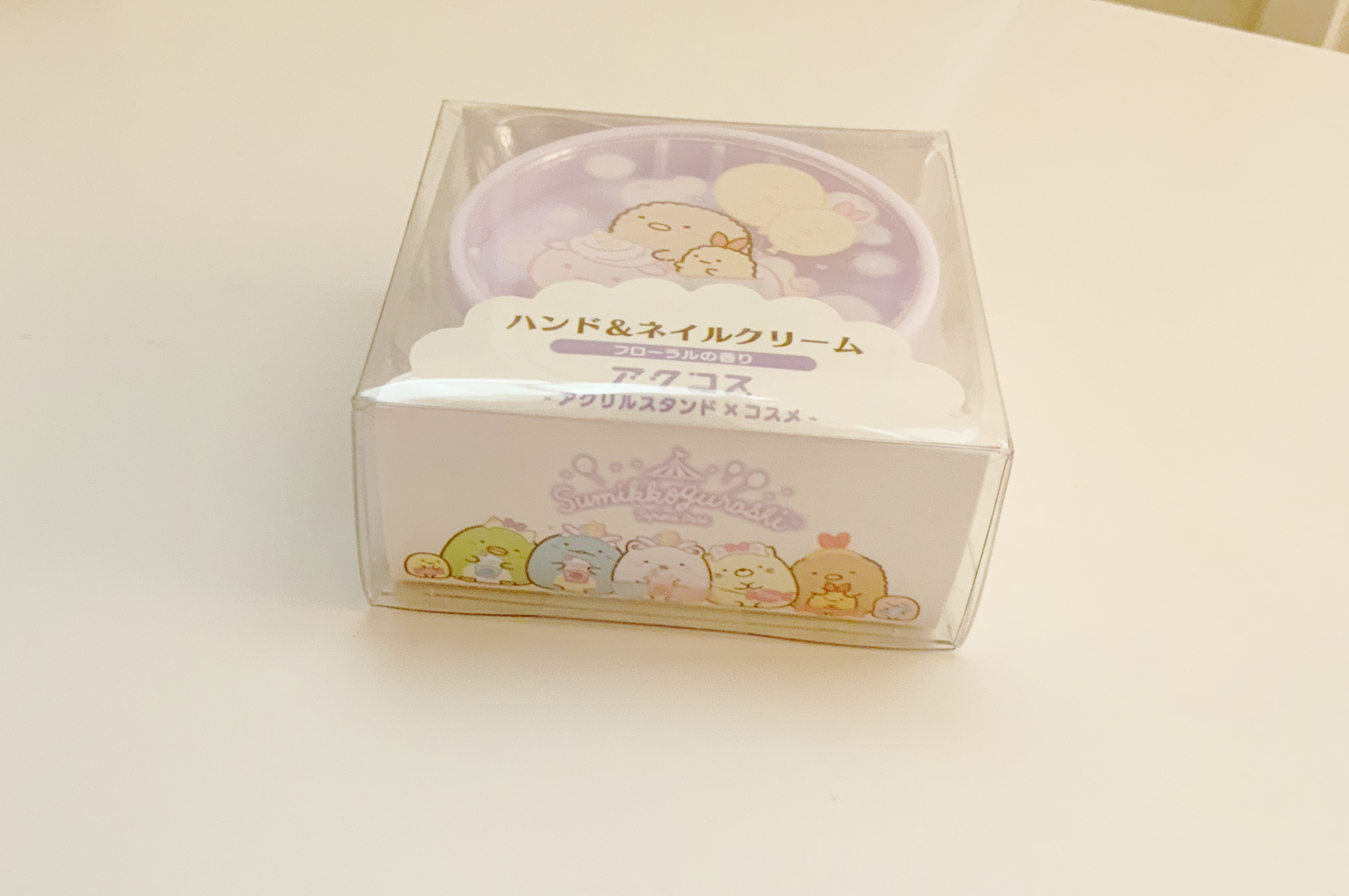 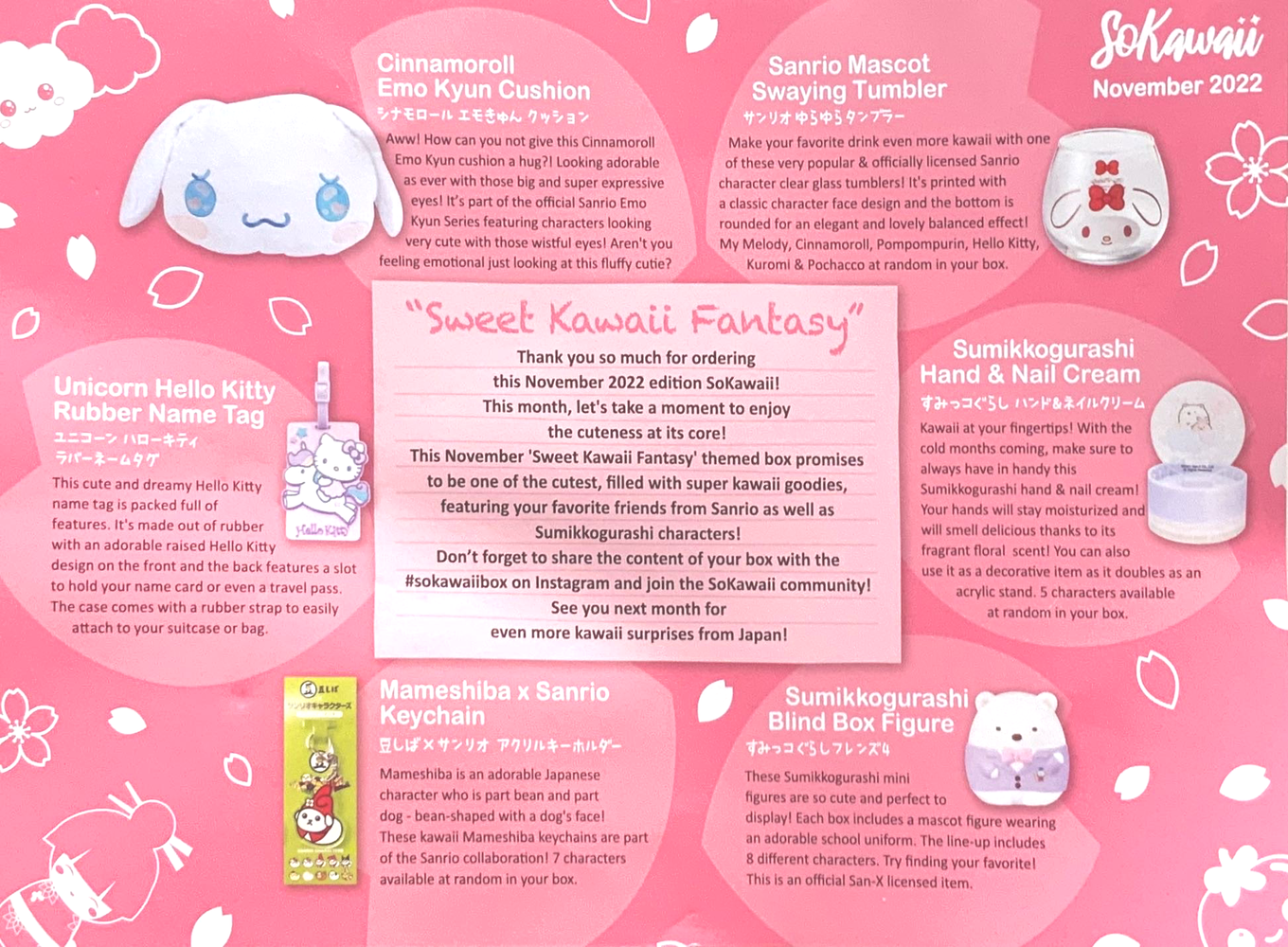